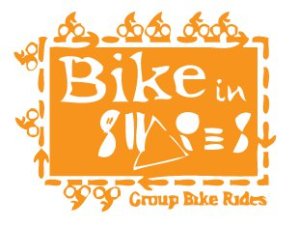 The NY Times’ Practical Traveler had a piece this week on Google’s ongoing effort to include biking routes in Google Maps.  Thankfully Eugene is one of the 200 cities included. For the purposes of BikeInShapes, we have continued to use the walking function for two reasons. (1) The biking function cannot be embedded in links yet and (2)  it is still easier to draw a specific shape accurately in the walking function. However, this ease derives from Google programming the biking function to prefer routes with non-traffic bike paths, even if it is not quite as direct. Below is an example comparing a straight walk (above) and bike ride (below) on 11th Avenue. The bike route veers south to capture some of the Fern Ridge path. Generally, this preferable for a biker: 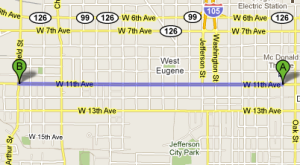 So the message to Google Maps: great start but add embedding capability to the biking function.

Also the article lists several good map route creation resources which we will link to on the right panel.

Let’s meet this Thursday at 7pm at Sam Bond’s on Blair for the June Bike in Shapes.  Everyone is welcome. We’ll head up to the Willamette River Biking path and trace the river  and “tongue” until the bridge near Beltline.Then we will make a little loop, referencing the “fly” before making our way back on the River Road bank of the river. Visit the Calendar page for a map of the route.

Sam Bond’s will be hosting a couple bands, with a $5 cover starting at 9pm. We should return by 8pm at the latest, giving us ample time for a pre-cover beverage. For those interested, here are the bands’ Myspace pages:   One Horse Shy and Brown Chicken Brown Cow String Band. In all, should be a bow chicka bow wow evening!

Concerts, charity runs, international travel…it’s hard to imagine doing anything these days without a t-shirt to prove you were there. Have no fear BikeinShapers, we’ve got you covered. Below is the hand-printed Summer 2010 design, so you better show up to be eligible for acquisition. Not shown: the summer map “tour” on the back.

Trees, trapezoids and Tetris pieces all have at least one thing in common: they’re shapes. Wouldn’t it be pointlessly magnificent to actually bike in the shape of these wonderful shapes?! That is, using a google map, we could trace out these shapes on the a city grid, and follow by biking the designed route. This is to Bike in Shapes.